What separates Generation Y from X, and is Generation Z a thing? How old is each generation? Are they really that different? It’s easy to see why there is so much confusion about generational cohorts.

If you’ve ever felt muddled by this "alphabet soup" of names…you’re not alone. The real frustration hits when you realize that Gen Y consumers will earn 46% of income in the U.S. by 2025.1 And unless you understand who they are and what they want, you won’t capture a dollar of their money. Furthermore, as one generation’s spending power decreases (i.e. Boomers) another is increasing.

A common source of confusion when labeling generations is their age. Generational cohorts are defined (loosely) by birth year, not current age. The reason is simple, generations get older in groups. If you think of all Millennials as college kids (18 - 22), then you are thinking of a stage in life and not a generation. Millennials are out of college and that life stage is now dominated by Gen Z.

Another example, a member of Generation X who turned 18 in 1998 would now be nearly 40. In that time, he or she cares about vastly different issues and is receptive to a new set of marketing messages. Regardless of your age, you will always belong to the generation you were born into.

The term “Millennial” has become the popular way to reference both segments of Gen Y (more on Y.1 and Y.2 below).

Realistically, the name Generation Z is a place-holder for the youngest people on the planet. It is likely to morph as they leave childhood and mature into their adolescent and adult identities.

Why are generations named after letters?

It started with Generation X, people born between 1965-1979. The preceding generation was the Baby Boomers, born 1944-1964. Post World War II, Americans were enjoying new-found prosperity, which resulted in a "baby boom." The children born as a result were dubbed the Baby Boomers.

But the generation that followed the Boomers didn’t have a blatant cultural identifier. In fact, that’s the anecdotal origin of the term Gen X — illustrating the undetermined characteristics they would come to be known by. Depending on whom you ask, it was either sociologists, a novelist, or Billy Idol who cemented this phrase in our vocabulary.

From there on it was all down-alphabet. The generation following Gen X naturally became Gen Y, born 1980-1994 (give or take a few years on either end). The term “Millennial” is widely credited to Neil Howe, along with William Strauss. The pair coined the term in 1989 when the impending turn of the millennium began to feature heavily in the cultural consciousness.

Generation Z refers to babies born from the mid-2000s through today, although the term isn’t yet widely used. This may signal the end of ‘alphabet soup’ (it does coincide with the literal end of the alphabet, after all). A flurry of potential labels has appeared, including Gen Tech, post-Millennials, iGeneration, and Gen Y-Fi.

Javelin Research noticed that not all Millennials are currently in the same stage of life. While all millennials were born around the turn of the century, some of them are still in early adulthood, wrestling with new careers and settling down, while the older millennials have a home and are building a family. You can imagine how having a child might change your interested and priorities, so for marketing purposes, it's useful to split this generation into Gen Y.1 and Gen Y.2.

Not only are the two groups culturally different, but they’re in vastly different phases of their financial life. The younger group are financial fledglings, just flexing their buying power. The latter group has a credit history, may have their first mortgage and are raising toddlers. The contrast in priorities and needs is vast.

The same logic can be applied to any generation that is in this stage of life or younger. As we get older, we tend to homogenize and face similar life issues. The younger we are, the more dramatic each stage of life is. Consider the difference between someone in elementary school and high school. While they might be the same generation, they have very different views and needs.

Marketing to young generations as a single cohort will not be nearly as effective as segmenting your strategy and messaging.

Why are generation cohort names important?

Each generation label serves as a short-hand to reference nearly 20 years of attitude, motivations, and historic events. Few individuals self-identify as Gen X, Millennial, or any other name.

They’re useful terms for marketers and have a tendency to trickle down into common usage. Again, it’s important to emphasize that referring to a cohort simply by the age range gets complicated quickly. 10 years from now, the priorities of Millennials will have changed — and marketing tactics must adjust instep.

Whatever terminology you use, the goal is to reach people with marketing messages that are relevant to their phase of life. In short, no matter how many letters get added to the alphabet soup, the most important thing you can do is seek to understand the soup du jour for the type of consumer you want to attract.

What makes each generation different?

Before we dive into each generation, remember that the exact years born are often disputed, but this should give you a general range to help identify what generation you belong in. 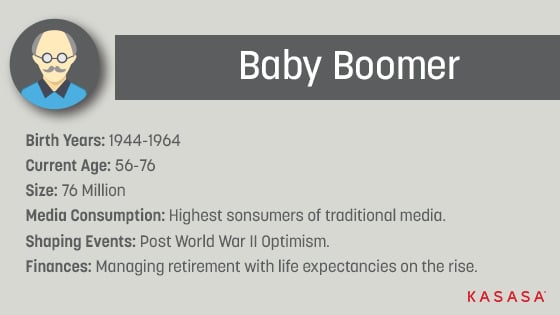 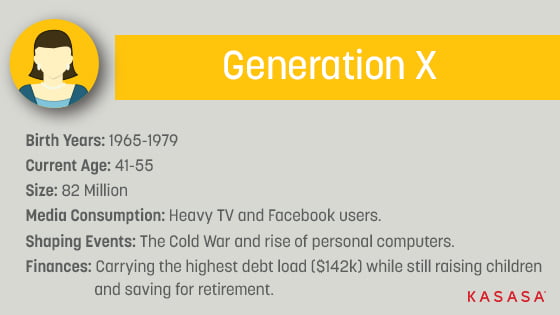 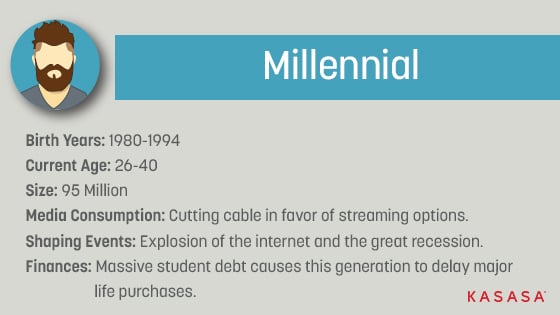 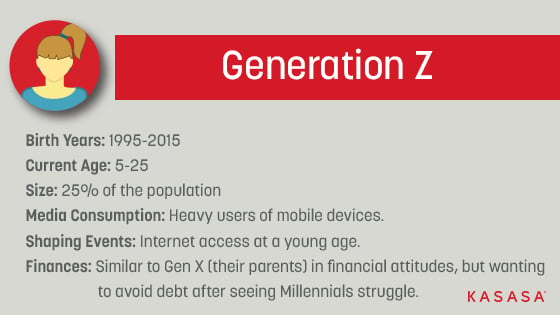 If you want to know more about Gen Z, check out this deep dive into their media consumption and banking habits.

Do Generations Use Technology Differently?

Younger generations have often led older Americans in their adoption and use of technology, and this largely holds true today.

Although Baby Boomers may trail Gen X and Millennials on native technology usage, the rate at which Boomers expand their use of technology is accelerated.

Absolutely, and for several reasons.

Knowing generational trends is important, as they can unveil similar attitudes and behaviors among consumers who experienced world events at the same life stage as their cohorts. And it doesn’t hurt to understand these age groups since marketing tools and audience segmentations generally include age as a factor. But the generations don’t tell the whole story and their behaviors can be hard to lock down. After all, every generation grows up. So. can you rely on age ranges alone? Here's what we think.

9 books every business leader should read this summer

The Scoop on Social: Strengthen and Lengthen Ties to Your Customers