3 Stories Of Real Change In The Communities You Serve

Here at Kasasa, we love celebrating community institutions who put community service at the center of their mission, who give back every day in ways both big and small.

Recently we put a request out to our Client Success Team for some stories that stand out among the crowd. Of course it was a difficult choice to pick just three. We know that every one of our 800+ clients works hard to serve their communities and give back.

However, we did discover some stories that were just too good not to share.

We spoke with Stacey Bush, Marketing Director for evergreenDIRECT Credit Union, and she told us about two initiatives that they support in Washington state. 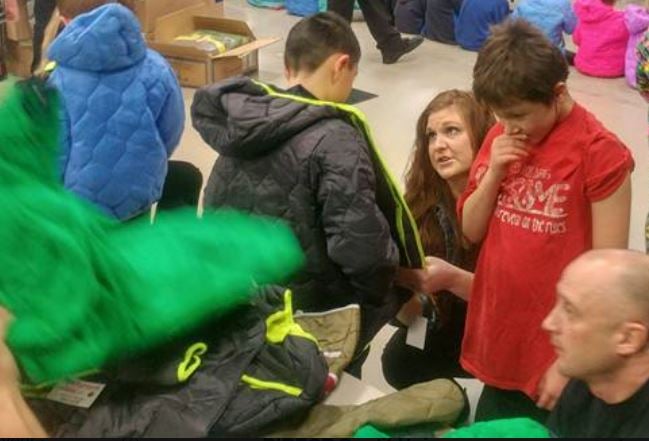 “We do Operation Warm. We not only give a donation that goes to give coats and hats and gloves to children in the Thurston County community. We also allow staff, during the workday, to go to the schools when they're handing those out and help the kids try on coats and gloves. Staff comes back so filled with warmth because of the kids, because they're so excited to get these brand new coats and gloves and hats.”

Stacey also told us about a $1,000 donation match they kicked off for the Little Red Schoolhouse Project:

“We not only matched that, we have members that gave supply donations and cash donations that we use to purchase more supplies, and it was just amazing, the whole project. Within one day of standing on the streets collecting money from going down the street we made over $26,000. It was very exciting.”

Tina Morrell is the Director of Marketing for Bangor Federal Credit Union. She shared with us about how their institution works to create a safer, hunger-free environment in the Bangor, Maine, community.

“One of the many things that we like to be part of for our state and our community is Maine’s Credit Unions Ending Hunger campaign. We fundraise all year long and last year, in 2017 — that was our biggest year ever and we were able to raise over $30,000 that we have the opportunity to put back into our community either at food banks, small soup kitchens, or even in the school backpack programs where they help students over weekends actually go home with a backpack full of food to feed their family.”

Sometimes the best way to give back is just to let people know that you’re present and ready to help.

“Our community is who we are and our neighbors and our families, they're us, and we want to be able to be part of them and support them any way that we possibly can," Tina added. "For instance, there's an annual Halloween event called Pumpkins in the Park that's held in a facility that's indoors. It's all lit up; a fun, safe environment that usually will see anywhere between six to 7,000 families and children come through again. It's still a nice way to actually be front and center in the community and getting to know our neighbors even more.”

Sharon Anderson, Senior Vice President, and Kelly Allen, Vice President with Williamstown Bank in Williamstown, West Virginia, gave us the inside scoop on their story, which earned them a 2017 National Community Bank Service Award honorable mention from ICBA.

“If we have to say one time in our bank or in our time with the bank that meant the most to us or we saw just what kind of impact we can have," Sharon said, "it would have been with the flood relief effort [the governor declared a state of emergency for 80% of West Virginia] that extended from 2016 into basically middle of last year. We started putting the word out on social media that we will be accepting donations for the flood relief effort. By Thursday of that week, we could not walk through our bank because of the amount of donations that we had received.”

“We also, at the same time this was all going on, coordinated a statewide effort with other community banks across the state and actually about five of those were Kasasa banks," Sharon explains. "Some of them were too far away to send donated goods, but they would send us money and the response that we got from our community and from our employees was just absolutely something that I don't know if it could ever be repeated."

Kelly adds, “Christmas became a huge effort again. We'd become friends with the lady running the church efforts. And so we started adopting families and we're trying to at least get them some supplies and clothing and some coats and get the kids some toys and we got mattresses, washers, dryers, bicycles, kitchen utensils. We threw a Christmas party and had Santa come and we had cookies and we had games."

“You see a different side of humanity when you're able to give something and not expect anything in return," says Sharon. "Truly the idea of community is so much more than a physical designation or a geographic area. It's about being there to support and provide hope for people in their time of need, not expecting anything in return.”

We want to hear your story too!

We know these three institutions are only the tip of the iceberg. If you’d like to tell us about the efforts of your community financial institution, give us a shout on Facebook, Twitter, or LinkedIn.