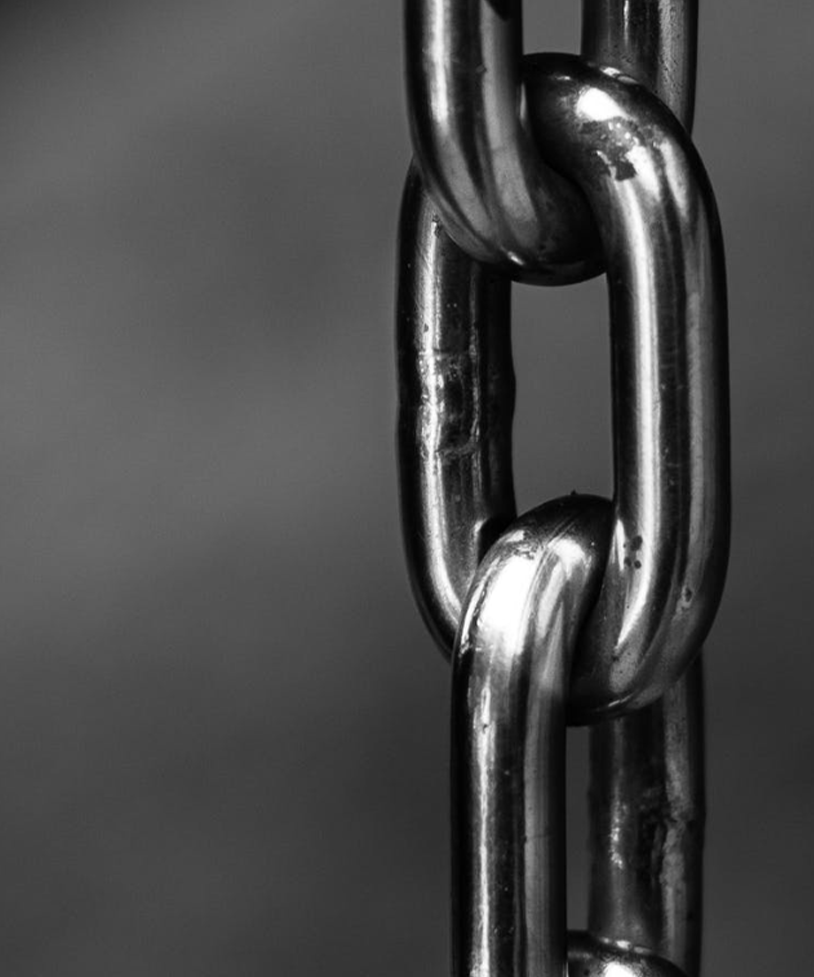 In The Innovator's Dilemma, Clayton Christensen talks about how incumbents have to support their existing sales (success) and are not always open to innovating even when it makes perfect sense for the customer and drives incremental innovation in an industry. As I look at blockchain powered distributed ledgers and their potential, especially in credit card payments, I don’t see how or why the payment networks Visa & MasterCard would push for distributed ledgers powered by blockchain to replace their traditional networks. By definition, a distributed ledger cuts out the middleman. Today these networks connect acquirers (e.g., Vantiv, First Data, chase, BOA, etc.) and payment processors (e.g., Elavon, TYSOS, Adyen, First Data, etc.) with issuing banks (e.g., Chase, Wells, Citi, etc.).

Ripple is changing this model with sub-second cross-border payments with automated best pricing from its network. Since Ripple payments are nearly instant, their model removes credit and liquidity risk from the process, lowering bank costs. Santander Bank has launched a foreign exchange service that uses blockchain technology by Ripple to make same-day international money transfers.

Today, Visa & MasterCard are using distributed ledgers in B2B payments and cross-border settlements. The Visa B2B connect platform allows financial institutions to process corporate cross-border B2B payments. MasterCard holds a patent application describing a blockchain-based database capable of instantaneously processing payments, guaranteeing that merchants don't need to wait days before receiving funds for their products.  Visa invested in Chain that offers Sequence which is a ledger service based on blockchain. While these are early days for blockchain, these companies are not in any hurry to replace their proprietary networks.

"MasterCard's virtues are well-appreciated by the stock market but the evolution of mobile payment habits and the rise of blockchain ledger technology could pose longer-term challenges to the company's wildly profitable business model." - Sequoia Fund

Both companies see the opportunity and the threats. Focusing on B2B payments on blockchain may be a prudent lean startup approach as this technology matures.

Most articles on this topic see this as an immature technology and the threat as overblown. What is being missed is the existing participants in the credit card network, the issuers, and the processors who could band together and accelerate the demise of the network.

A very simple (this is high level, and the devil is in the details) reference architecture that uses a distributed ledger and cuts out the network would look something like this; Processors and issuers would all be on the distributed ledger and there would be a single immutable definition of a consumer credit file. The ledger will be a consortium ledger (e.g., Ripple and Hyperledger) and not a public ledger (e.g., Bitcoin or Etherium). The consortium would be comprised of the processors and the issuers. Notice there is no network (e.g. Visa & MasterCard) in this architecture. The ledger is the network. 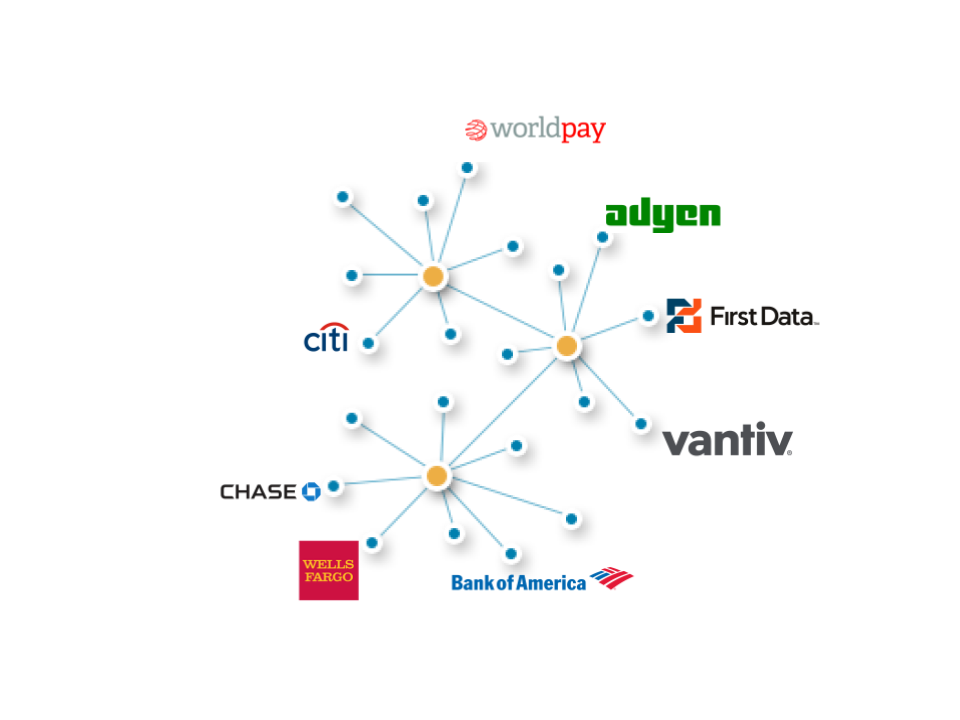 Long term, there is no reason why the acquirers cannot directly connect to the ledger. Which puts in question the value of the processors. Put another way, when two banks (the issuer and the merchant’s bank) can connect in real-time on a payment, why do we need middlemen to connect them? It becomes a transaction between two banks' accounts, much like a business to business payment today. Processors play a key role in providing last mile connectivity to the POS and other services such as fraud detection.

Public blockchain ledgers have struggled with speed; it takes 10 minutes for a new Bitcoin block to be created and added to the chain and about 14 seconds for an Etherium block to be created /updated. There is also the problem of the low number of transactions with Ethereum ~ 15 tps and Bitcoin ~ 7 tps. That does not work for payments.

However, a consortium ledger with fewer nodes and based on Etherium could achieve much faster speeds. There are many efforts already underway to speed things up, like off-chain channels such as the Lightning Network and the Raiden Network. Ripple also solved the speed problem with its XRP product. It supports 1500 tps and 4-second payment settlements. However, speed and volume are still limitations that we cannot gloss over.

Regarding security, the inherent cryptography centric architecture built into blockchain makes it more secure than anything a network could provide.

The 16-digit credit card number and plastic work quite well even in this new distributed ledger powered network. Other than the MII (the first digit that identifies the network) everything else still applies; issuer identification, account number, and checksum. By keeping card schemes as-is, no change is required to POS terminals and routing logic from POS to processors. Technically one would only need 15 digit card numbers.

Networks Have Misaligned Incentives To Innovate

A good way to analyze how incumbents adopt new technologies in an industry with an established business model is to first understand what value a participant provides to other participants and what are the invectives to provide that value. When innovations redefine value and in turn the participants providing that value either become more or less valuable or even irrelevant, incumbents fight back by either pushing back on adoption or slow rolling adoption. The networks play the role of the connectors and the routers in a card transaction. That is their primary value. In a distributed ledger powered payment network, that value vanishes. 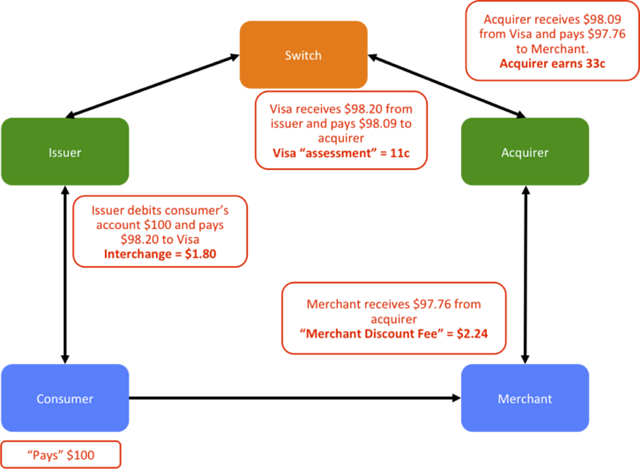 Before we paint the networks as the bad guys, let us understand that the biggest cost to a merchant is interchange, and it is the issuers who get to keep a majority of this fee. They are the ones who are taking on the consumer credit risk. Acquirers also take on risk concerning merchant credit, chargebacks, and issuers settlement refusals, but their take is small compared to the issuers. Interchange is a fee charged to acquiring banks, set by the associations, and paid to the issuing banks for the service of accepting a credit or debit card as payment. Acquiring banks may pass the costs along to merchants via the discount fee.

If two of the top processors (Vantiv & FirstData) decided to work with the top two issuers (Citi & Chase) and try out a distributed ledger, they would be able to handle close to 50+% of the US card transaction volume.

The use of a distributed ledger to facilitate credit card payments would not work if any one company decides to go down this path alone. Rather it would require a consortium of companies on the issuers and processing side to partner. Any change that needs merchants and consumers to change would be met with resistance. If payment processors could make changes such that front end systems do not change, resulting in zero change for merchants and acquirers, then it has a much better chance of succeeding.

The first to get disintermediated would be the networks (Visa & Mastercard) followed by, at some point in the future, the payment processing companies (FirstData, Vantiv, Worldpay). For that to happen, much would need to change in POS payment systems. Adoption of mobile payments and alternative payments methods may expedite that.

In the end, in its purest form, a payment transaction needs a buyer’s bank to connect to a merchant’s bank and a distribute ledger works well for this use case. 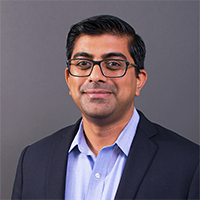 Pradeep has 17 years of experience managing software product engineering teams across industries. Prior to joining Kasasa®, Pradeep co-founded Oink, a payments company targeted toward the under-18 demographic that won several industry awards, including Finovate “Best of Show” in 2013. Pradeep has also led new product development initiatives at Energy Solution Internationals and Thermo Fisher Scientific. He is a graduate of the Jones Business School at Rice University and holds a postgraduate diploma in Management and a bachelor's degree in Computer Science.

Are you over-emailing your consumers?

The key to email marketing is segmentation, which allows you to avoid annoying your consumers via email. Here's what segmentation really means.

4 ways marketing will look different in 2022

Four changes in the marketing world will make 2022 a year for strategic adaptation. Here’s what banks & credit unions need to know.