When I first started at Kasasa (then known as BancVue), Fed Funds was targeted at 4.50%. Short-term CD specials were clipping 5% as banks and credit unions clamored for deposits.

Three months later, target Fed Funds hit its peak of 5.25%, those same CD specials started pushing towards 6%, we were launching clients with 6%+ REWARDChecking accounts, and some were as high as 7%. This was the new norm of competition for consumer deposits for the following 15 months.

Then the bottom fell out. The Fed Funds target plummeted to a historically unique "0 - 0.25%". Financial institutions large and small that had been strategizing about getting their fair share of consumer deposits only 18 months prior were now talking about how to run those same deposits out. And this is where we stayed, for the next seven years.

If you spend much time in the world of consumer deposits, the last year has brought some much-needed relief to an otherwise bleak decade. Loan demand, both consumer and commercial, is finally showing signs of life, and the need to fund that lending machine translates to an increase in demand for deposits. Given the long-term value of core consumer deposits, competition for those dollars is heating up. But unless you're asleep at the wheel, that competition is not news.

A Megabank Is Testing The Waters On Deposit Rates

We've all become accustomed to the on-going competition from online-only providers. A brief look at any of the myriad of sites dedicated to finding consumers the best rates for deposit products produces a who's-who and a who's-new in this space. Mixed in among those search results will often be local community financial institutions, smaller banks and credit unions serving that market with a brick-and-mortar presence, that are also historically more competitive on deposit rates.

What you will rarely find on these sites, and certainly never near the top of the list, is a megabank, and with good reason. Given their uncanny ability to attract new consumers with nearly non-existent deposit rates, and the extraordinary deposit risk a high-rate deposit product could present for their existing base, this game is one that they have simply not needed to play.

Last week, Wells Fargo quietly entered the high-rate consumer CD market in eastern Iowa. While their CD specials in Austin (my home) are between 0.65% and 1.65% depending on term, the identical specials in eastern Iowa are starting at 2.00% and climb to 2.60%. 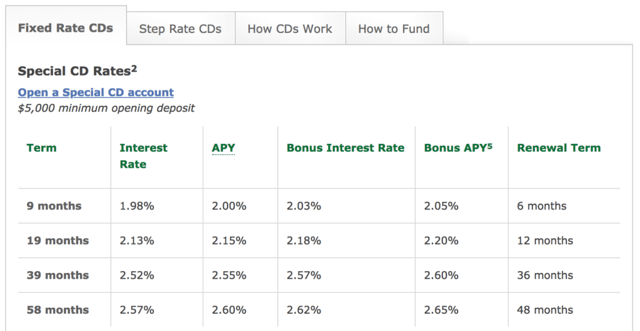 Wells Fargo is currently third in deposit market share in Linn County (an arguably flawed metric, but that's another conversation) and is the largest institution in the market by a factor of four. However, third place only represents 13.3% of the $4.7B of deposits in the market, so there's plenty of potential opportunities.

This Is Only the Beginning

Why should anyone outside of eastern Iowa care about what Wells Fargo is doing? If you were Wells Fargo and were considering the idea of getting competitive with deposit rates, but you didn't really have any data on what the impact would be, would you damn the torpedoes and see what happens? Or would you pick one of your smaller test markets, make the change there, and use that data to drive future tests and decisions?

The truth is one of the biggest values of having a network the size of Wells Fargo's is the ability to run tests like these. We'd all love to run a few tests in $4.7B markets like Linn County before going live in a $4.6T market like Travis County.

The truth also is that if this strategy works for Wells Fargo, and if they decide to get competitive on consumer deposits, that move will force the other megabanks to follow. This will be absolutely unprecedented; modern banking has never seen a world where community financial institutions, online providers, and megabanks are all competing aggressively for consumer deposits. While consumers will love it, this will bring a whole new dynamic to those fighting for consumer attention, and everyone (particularly community financial institutions) will have to adapt.

The question, of course, is how. Most community banks and credit unions simply don't have the network to test. Wells Fargo can run an experiment on thousands of consumers in Linn County and gather all of the data it needs to while only impacting a fraction of a percent of their total consumer base. The average community bank or credit union, on the other hand, simply does not have enough customers or members on which to test - because the sample set would be too small to prove statistically significant, or a large enough sample set would carry too much risk.

Tapping Into The Successes Of Others

Everyone needs a network. Unless you are Wells Fargo or one of the other mega- or online banks that has built their own, finding other financial institutions to partner with is critical to your success. And by "partner", I don't mean "play golf". You should be sharing data, success stories, failures, everything you can. One thing I continue to reinforce to all of our clients is that 99% of the time, the community financial institution across the street is not your primary competition. It's the megabank on the corner or the online provider that doesn't even have a physical presence in your market, but who is silently ACH-ing your deposits away that you need to worry about.

This move from Wells Fargo means everyone needs to pay closer attention to consumer deposit pricing. Lean on your network and see what you can learn. I recently updated a white paper I wrote about ways to survive when interest margin is getting thin, called "The Silver Bullet for Margin Compression". If I can help in any way, I'd be honored to do so.

Here’s what consumers expect to see from a financial institution